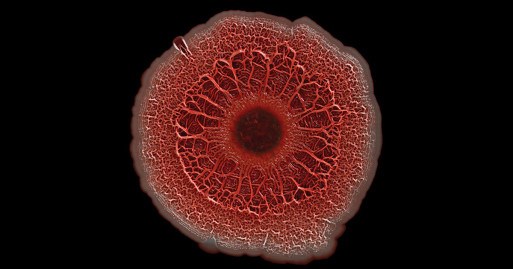 Snapshots of Life: Portrait of a Bacterial Biofilm

In nature, there is strength in numbers. Sometimes, those numbers also have their own unique beauty. That’s the story behind this image showing an intricate colony of millions of the single-celled bacteriumPseudomonas aeruginosa, a common culprit in the more than 700,000 hospital-acquired infections estimated to occur annually in the United States. [1]. The bacteria have self-organized into a sticky, mat-like colony called a biofilm, which allows them to cooperate with each other, adapt to changes in their environment, and ensure their survival.

In this image, the Pseudomonasbio film has grown in a laboratory dish to about the size of a dime. Together, the millions of independent bacterial cells have created a tough extracellular matrix of secreted proteins, polysaccharide sugars, and even DNA that holds the biofilm together, stained in red. The darkened areas at the center come from the bacteria’s natural pigments.